** An ADA-compliant kayak launch is available for free public use at Ontario Beach Park. This launch was made possible through a collaboration between the Canandaigua Lake Watershed Council and Ontario County.

The launch will be installed seasonally and removed during the winter months.

Instructions for use will be posted on the launch. 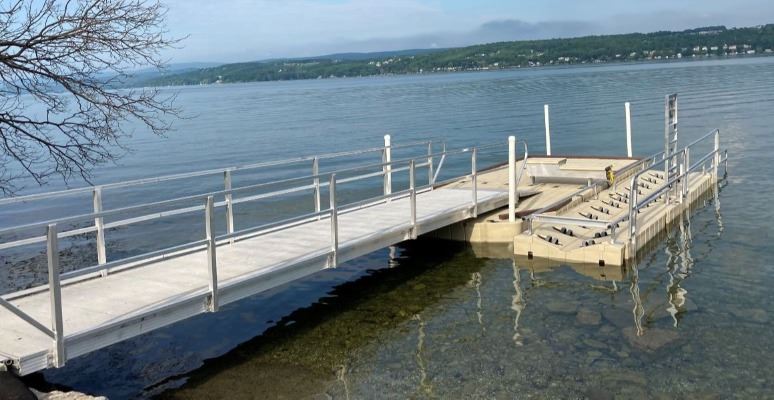 The parks known as Ontario Beach Park and Deep Run Park became  county parks by accident. Both had been used by the public for decades prior to becoming county property in 1969. The state claimed that both parks consisted of parts of the right-of-way of state route 364 (East Lake Rd.). In addition, the Town of Gorham also claimed a right of way that predated the movement of route 364. An adjacent landowner also claimed a portion of the park. That person even tried to block public use of the informal park by erecting a short-lived chain link fence across the north end of the area. The Daily Messenger published a story on February 27, 1967 reporting that “The Ontario County Board of Supervisors has tentative plans to develop a lakefront property known as Deep Run into a county park at some time in the future. However, there have been several complications regarding title to the land…” It took several years to clear the title to both parks with the state insisting that they be cleared together. In practical terms, both stretches of park were created when the East Lake Road was moved a few feet to the east, taking it away from the lake shore. Very little was done until 1983 to improve the smaller strip of park land known variously as Ontario Beach Park, or simply as County Park. That year, in response to the complaints of neighbors, the park was fenced off from the highway, received basic landscaping and had restrooms installed. Although it had been an informal bathing area for decades, a decision was made then that there would be no swimming and no lifeguards at County Park. Initially, there were to be no picnic tables. All of those constraints were the result of budget issues according to County Administrator, Elwyn Herendeen. Tables were added later and the park, with its unique steps down to the lake, remains an inviting stretch of lakeshore.

Ontario Beach Park, located on East Lake Road outside Canandaigua is a carry in / carry out park available for picnicing only. There are picnic tables, grills and restrooms available.  There are no lifeguards on duty and swimming is prohibited in the park.  Both entrance and parking are free to the public.